The scanning method is explained here.

By the number of scanned players.

The difference between the low and high population servers is pretty extreme - 27 times in the US and 46 times in Korea. This is partially explained by the smaller realms being pretty new.

Based on the number of scanned players (active 85s).

It's hard to imagine what being in a guild of almost a thousand active 85s is like. Probably pretty different. That's 3 times the size of the whole active population on some realms.

Guilds with the most achievers.

Guildmates often work on the achievement together, so seeing 2 or 3 from the same guild is fairly common. The Russains are pretty hardcore though - 37% more Insane than the number 2 guild.

Based on when the achievement was completed.

You can see a big spike at the end of WotLK, due to an announcement by Blizzard that the achievement would be taken away. Players rushed to finish an epic achievement and earn the title. Cataclysm came out with the achievement still in place, but with relaxed requirements (no more Shen'dralar rep needed) and so the rate of earning stayed high while players who were almost done finished it up. The big spike at the end of the graph (Jan/Feb 2012) was due to patch 4.3.0 making Darkmoon Faire rep much much easier to obtain.

The relationship between active population and insanity. 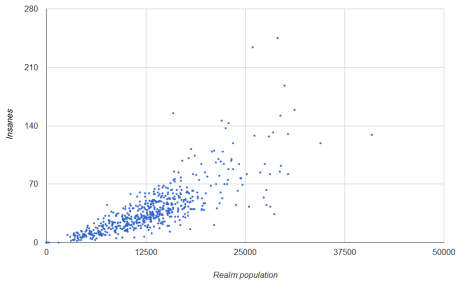 There's a pretty strong relationship between active realm population and number of insane achievers. There are few outliers, like Ревущий фьорд (Howling Fjord) with 155 out of 15,939 insane (high) or 亞雷戈斯 (Arygos) with 21 out of 21,090 (low). The full data is available in this google doc.

If you're interested in further analysis, you can download the entire MySQL database snapshot. It's a 153 MB .tar.gz file containing a text dump.
© 2012 Cal Henderson
Suggestions, comments, abuse etc. to cal@iamcal.com